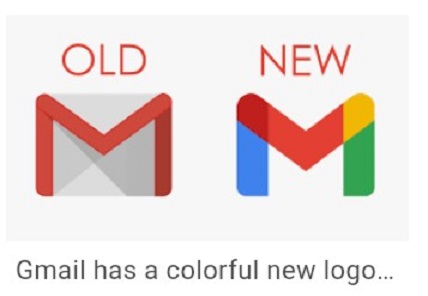 The Gmail new logo is a version of the existing logo; Google has released a new update to the Gmail app for version 2020.10.04.

The new logo has won; it’s colorful, clean, and modern. It comes by default on your device; so don’t worry you will definitely see it when you open a file on your Gmail.

The Gmail envelope is no longer available. The new Gmail logo is now an M made in Google product colors of red, blue, green, and yellow. It closely resembles the same logos of Google itself, Chrome, Google Maps, Google Images, and all other Google products.

The change came as part of G Suite’s renamed as Google Workspace and Google removes its Gmail envelope and replaced it with beautiful shades of color letter M.

The new Gmail logo still feels very red, with a slight touch of blue, yellow, and green emphasizing the M curve. When you put it next to other Google logos, it’s hard to distinguish between them. Google has also upgraded its Calendar, Meet, and Docs logos to match the new Gmail design.

How to Get a Gmail New Logo

As soon as it’s installed, you will see a new icon that replaces the existing one in your app launcher with different menus, also in the notification bar. You will see the new M icon in the screen. It will take getting used to, but at least it is still red.

The update brings up a quick settings menu that will automatically pop up when it comes to your account and automatically updates itself.

Note that installation has begun for all Gmail accounts and other G Suite users now Google Workspace users.

However, before an update can come to you, you will need to update the application you are using to latest version if it has expires.

However, with the latest Gmail updates, you get Gmail faster, better security with many other great features you will find.

Similarly, you can get the latest Gmail logo Update in the Apple App Store and Google Play Store. It’s free and easy to find in your device.

How to Update Gmail App

Just like that, the update will start installing and once that is complete, launch the app. The app icon has also changed.

This website uses cookies to improve your experience while you navigate through the website. Out of these, the cookies that are categorized as necessary are stored on your browser as they are essential for the working of basic functionalities of the website. We also use third-party cookies that help us analyze and understand how you use this website. These cookies will be stored in your browser only with your consent. You also have the option to opt-out of these cookies. But opting out of some of these cookies may affect your browsing experience.
Necessary Always Enabled
Necessary cookies are absolutely essential for the website to function properly. This category only includes cookies that ensures basic functionalities and security features of the website. These cookies do not store any personal information.
Non-necessary
Any cookies that may not be particularly necessary for the website to function and is used specifically to collect user personal data via analytics, ads, other embedded contents are termed as non-necessary cookies. It is mandatory to procure user consent prior to running these cookies on your website.
SAVE & ACCEPT